Even though I'm a UK-based researcher, I am still occasionally caught out by questions concerning which bits of the British Isles go where.  What exactly is the 'United Kingdom'? Or the 'British Isles'? You know the sort of thing.  Well, with the passing of St.George's Day (yesterday), I was reminded of the problem by Audrey Collins on her always-interesting 'The Family Recorder' blog - see here.  Audrey's piece merely touches on the issue, of course, but I always find the famous Euler diagram useful:- 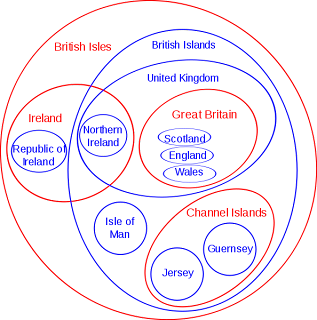 For those who wish to confuse themselves further, take a look at the Wikipedia article from which the diagram was taken, here.  There are several subtly different versions of the above illustration on the Internet, but I reckon the one shown is near enough correct ... unless someone thinks differently!?

On another topic entirely, MyHeritage discuss supercentenarians on their blog, here.  A short piece, but with one or two useful links to further information.

The GOONS has issued a reminder about its forthcoming Mining Seminar to be held in Northumberland on Saturday 21st May - so I'm assuming that there are still places available!

OK, so it's not British/Irish news, but Ancestry are offering free access to their Canadian marriages during 22nd-30th April - to add to the existent offer for their England/Wales marriage indexes.  See here for more information.

1916:  Easter Rising begins in Ireland.  More than 250 civilians are killed and 2,000+ injured in the week-long revolt against British rule in Ireland.
Posted by HistoryMick at 14:54