Scottish researchers will probably already be aware of the forthcoming merger of the National Archives of Scotland and the General Register Office for Scotland.  The new body will be known as the National Records of Scotland, its official birthday being 1st April 2011.  Rather than have me blabbering on about it, take a look at Alan Stewart's tidy summary here.

Lingering news from the RootsTech Conference in the US can be found at the blog of someone who was actually there, namely, Audrey Collins, here.  If you're interested in the link to the videos of the talks, I hope you have more luck than I did trying to open them - but that could be my ancient PC playing up.  Audrey also flagged up this curious little fella.  I've had a very quick look at it (you need a Facebook account to play it), and wasn't sure what to make of it.  If anyone decides to give it a whirl and provide me with some feedback, then that'd be great.  Could it be the next big thing in family history? (well, apart from BI-Gen, of course!)

Your Family History magazine's monthly 'Web Watch Extra' feature can be found here.  I think most of the important stuff has already been mentioned on this blog, but have a quick look all the same.

As for Irish news, well, there is a little bit more on the launch of the 'Irish Archives Resource' here - which I originally mentioned a couple of days ago. 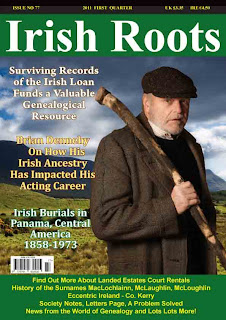 And also, a special mention for Irish Roots Magazine, with whom I have been exchanging some friendly chat of late.  They have promised to keep me appraised of their issue releases, so here are the contents of the latest edition.
Posted by HistoryMick at 15:11